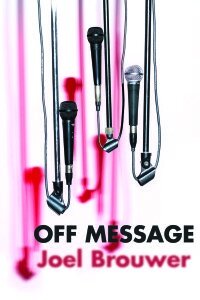 “Joel Brouwer’s itinerant and moral mind is always online, seeking to aggregate our surfeit store of information into some kind of meaningful ore, and to measure the distance between civilian and collective, between action’s rhetoric and action itself. Off Message’s disquieting prognosis for our era of surveillance should make us all more alert, more aware. It’s a thrilling and masterful book.”

“Lacerating. Skewering. Anything you can do with a blade Joel Brouwer does in Off Message, in poems attuned to hypocrisies large and small, where “after intense/lobbying the transparency committee/approves a series of closed door hearings,” where seabirds “cloaked in oil” can be considered rich. “They must have marveled at distance’s power/to deceive and to wake deception’s twin, oblivion,” he writes in “Lines on Distance,” a poem that opens the book up with a bang. We need a book like this, to sound through all the fiddling in burning Rome; they should hand it out to every voter at the polls.”

“Off Message beautifully disproves the reductive cliché that politics makes bad poetry. Instead of proclamation, Joel Brouwer pursues complication, distressing a quiet free verse tradition. Nothing in these poems is easy. It’s a vexed world, and Brouwer is writing equally vexed, yet stunning poems about and for it.”