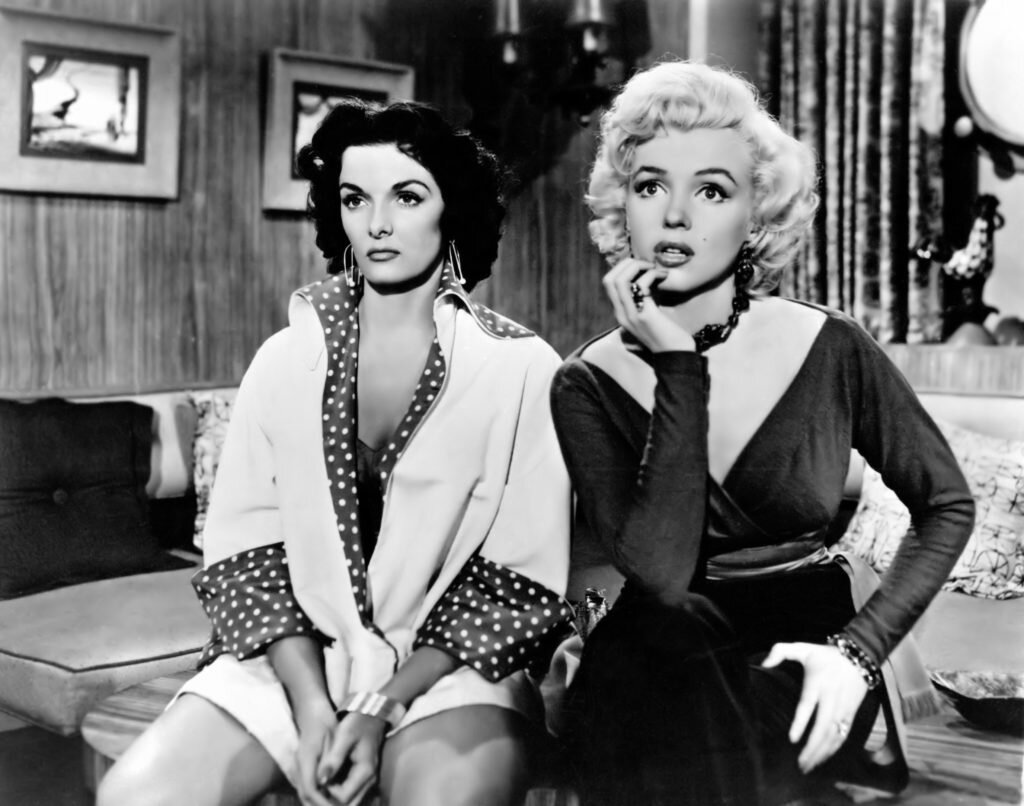 For a movie that’s ostensibly a comedy, there’s a surprising rip current of anxiety and fear just beneath the surface of this story that seems constantly about to suck everyone under. So much is at stake for all the main characters; even as they try to act playful about the games they’re playing, they’re all very evidently terrified. To have no money, to lose your reputation, to be alone, to be cast out, to be cheated, to be stolen from — everyone scrambles to avoid these catastrophes, pressing for advantage, using whatever leverage fate has lent them. If you’re beautiful, you use that to get over; if you’re rich, you use that; if you’re clever, you use that. It’s all coated in sequins and soaked in champagne, but it’s a lot closer to Mother Courage than it looks. I see on Wikipedia that Fassbinder called it one of the best ten films ever, which seems insane until you think about it — isn’t Marilyn Monroe’s Lorelei Lee just as determined, wily, brilliant, desperate, and calculating as Hanna Schygulla’s Maria Braun? We know the story (thanks in large part to Fassbinder) of people doing whatever they had to do in postwar Germany to survive; maybe this movie proposes an analogous situation for single American women in the same period, with fewer weevils in the bread and more singing and dancing. Or maybe it was and is always thus. Anyway I found it depressing. Featuring matrimony in its usual role of deus ex machina.

I’ve been dragging my feet on this one; it’s a sad and complex movie. I think of the three films in the BRD trilogy this is the most dispiriting, the most enervated, the most torn. It’s shot in Sirk-esque Technicolor, which seems to point simultaneously forward to a bright future and back to a melodramatic swamp in the past. It draws its storyline from von Sternberg’s Blue Angel, which again seems to suggest both evolution/transformation and the idea that nothing is new under the sun. An optimistic and aboveboard building inspector moves to town, prepared to take on corruption and get the city’s fathers to conduct business honestly. But there’s no hope; everyone is who they are. Whores are whores and crooks are crooks. We might enjoy the ideas of progress and enlightenment, but they’re really just fantasies, fan dancers in the nightclub of history. A beautiful tragedy on par with Fassbinder’s best.

This is Fassbinder’s next-to-last film and the middle piece of the BRD Trilogy focusing on the years immediately following WWII in Germany. Veronika Voss is a washed-up film star, and Fassbinder obliges her much as Billy Wilder obliged Gloria Swanson in Sunset Boulevard, shooting in high-contrast black and white to make her feel at home, despite the fact that by 1955, when the film is set, we were well into the color era.

In Maria Braun, Fassbinder offered a model for survival, but asserted that in order for the model to work, his countrymen would have to reorient their moral compasses a bit, giving up on the kind of rigid ideals of purity that had led to disaster. In Veronika Voss, he’s in an even less merciful frame of mind. Veronika — in some ways standing in, I can’t help but think, for the German people — shows herself desperate to live in a world of illusions, completely averse to facing reality, and thus makes herself completely vulnerable to the heartless and self-interested machinations of others. You know from the get-go that it’s not going to end well for her; I’m not giving anything away.

That would have been enough, right there, for a richly metaphorical and allusive story, but Fassbinder, as usual, has layers upon layers to add. To me the most fascinating character here is the average-joe lunkhead sportswriter Robert — a sort of Oscar Madison type, it occurs to me; was Fassbinder aware of Simon’s play? — who inexplicably falls for the faded rose Veronika, throwing over his very nice girlfriend and almost losing his job in the course of trying to help and protect her.

What explains Robert’s behavior? It’s a kind of fantasy-within-a-fantasy: In order for Veronika to believe she’s on top of the world, she needs someone else to believe it. But what does Robert need? I think that’s the question worth pursuing. Once you start counting up the master-slave dialectics in here — doctor/patient, suitor/pursued, director/actor, cop/criminal, pusher/addict, USA/Germany, editor/writer — you start to feel you’ve entered a hall of mirrors.

Fassbinder used to intimidate me, or maybe confuse me — the idea of his oeuvre I have in my head is of a jumble of contradictory bits and pieces. It’s probably something to with his making 40 movies in fifteen years; that’s a body of work, one assumes on some instinctual level, that can’t possibly be coherent.

But my stars, look at this, an absolutely amazing film, fully-realized, resonant, challenging, timeless. He’d still have been thought a genius if he’d made only this one.

Maria Braun’s marriage is an unusual one. She marries Hermann Braun in 1943 when he’s home on leave for two days. He goes back to the front and at the end of the war is missing and presumed dead. Maria remains stubbornly faithful to him, always expecting his return. “Faithful” starts to become complicated when she’s driven by poverty to become a bar girl, and then even more complicated when she takes up with an American serviceman. So far the story could be a Hollywood melodrama; here’s where Fassbinder swerves. Maria’s relationship with Bill, the American soldier, follows neither of the two predictable formulae: She’s neither callously using him for nylons and chocolates nor falling madly in love with him. Instead, the both of them seem simply to enjoy each other, assuming nothing and expecting nothing. He’s middle-aged, a little overweight, and very sweet; she’s playful and frank; they eat and drink and sleep together and don’t make a big fuss about it. I’d like to say that what they have is an adult relationship. And it gets me thinking about how completely rare it is to see one of those represented on the screen. Fassbinder’s Ali: Fear Eats the Soul features a similar relationship. It might be my favorite thing about Fassbinder, this capacity, which shouldn’t be as unusual as it is, to show how human beings actually conduct themselves in real life. But at the same time the situation here is entirely unreal — this is postwar Germany and the world is completely upside-down for all these characters. The only thing that remains constant, the only compass point, is Maria’s commitment to Hermann, though that commitment does take increasingly strange forms as the story progresses.

I’m not going to say much more about the movements of the plot, which are both surprising and steeped in inevitability as in all the great tragedies. I think it’s just a miraculous movie, the way it does such good work probing the general terrified, voracious, survivalist atmosphere of the Wirtschaftswunder while also telling a very human stories of these characters. People will compare Maria Braun with Mother Courage (another strong woman who keeps her family’s integrity by inventing new definitions of integrity) and Fassbinder with Brecht. It’s true that Fassbinder uses some Brechtian techniques to alienate us from the emotional lives of the characters (famously, during emotionally volatile scenes in this movie (and in others of Fassbinder’s), the radio loudly and relentlessly broadcasts a football match in the sonic foreground of the scene), but Fassbinder’s characters do not seem like types to me. Maria, the men she loves, the men who love her, all seem whole and real, and the sociological commentary, though always incisive and fascinating, always seems secondary to me. I don’t think Fassbinder would have been pleased to hear that, but to me it’s a mark of his genius.

Next up: The second and third parts of what’s often called the BRD Trilogy. I think I’ll need to wait a few days before I watch Veronika Voss, though — I want to think about Maria a little longer.