I’m thinking I might just read science fiction for the next four years. There are a lot of iconic writers I’ve never read, or read only a bit of (Butler, Delaney, Dick, Heinlein, Le Guin, et al.), and I confess I wouldn’t mind thinking about society and culture at one remove for a while, instead of right up close in the moment. Sort of like putting on a pair of psychological sunglasses, maybe.

I did read this novel before, a long time ago, but went back to read it again after recommending it to a student working on a story which takes place in a world where the seas have risen to the point that people are living underwater.

Much has been made of Ballard’s prescience; I’ll skip all that and make a few notes regarding the book on its own terms. I like it less than I remembered liking it. Probably when I first read it — in college, maybe? — I was mostly focused on its hypnotic thanatos. This time I got hung up on its repetitiveness (no synonym of “miasma” goes unused), and also the flat characters, in particular the one female character and the “Negro” characters, who are so flat they barely register. It does certainly, though, set in motion some interesting trains of thought. Not so much about human-made climate change and the perils of overdevelopment — there is none of that — but rather about the archetypal fiction of the cool, scientific, organized, rational North vs. the hot, irrational, chaotic South. It’s fun to think that a global catastrophe drowning the planet under 60 feet of water would naturally cause the British to deploy scientific research stations, and that the researchers would drink sherry in their off hours. 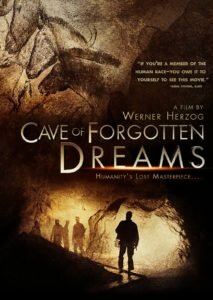 As is the case with Herzog’s other late-period documentaries, one’s interest is divided between information and atmosphere; you watch this a little bit because you’re interested in the astounding paintings inside the Chauvet Cave, and a lot because you want to hear That Voice talking about steam and the abyss of time and mutant alligators reclaiming the earth. I am a sucker even for the interminably slow tracking shots scored with lugubrious arias. If you ever start to feel like your individual existence matters in some way, watch this for a swift corrective.