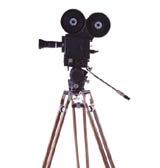 “Report all changes as they occur,” says the Colonel in charge of the mission into Burma to destroy a Japanese radar station. The first twenty minutes of this movie always give me the giggles, as the expeditionary force in the middle of fookin nowhere painstakingly plans their upcoming operation in ridiculous, obsessive, exacting detail. They pore over maps, create huge 3-D models of the operation area, peer at recon photos through magnifying glasses, spout off long litanies of exactly which supplies each soldier is to take, and on and on and on. You start to wonder: if a 24-hour, 20-man mission takes this much planning, shouldn’t D-Day planning have taken a decade? Walsh is filming this near the end of the war in the Pacific, and I wonder if he could sense that a weary public would be consoled to see a version of the conflict that made it seem like a complex technical problem to be solved, rather than a massive mess of slog and blood. The characters on the mission must synchronize their watches a dozen times over the course of the film, and every time they do, they’re always already synchronized.

After the planning sequence, things go pretty much as you’d expect: the mission is accomplished, with complications, and all ends well, as it had to. There are deaths, but — this is crucial — they’re always the result of accidents or deviations from SOP. They’re never inexplicable, and so, perhaps, they’re never quite terrifying.

Note that the Brits and Australians were the real boots on the ground in Burma, not the Americans, an inconvenient fact Hollywood chooses to ignore.

In 1964 this film — about an attempt by the Joint Chiefs of Staff to take over the civilian government, after the President has negotiated a disarmament treaty with the Soviet Union — probably seemed hysterical, paranoid, and terrifying. But then of COURSE democracy triumphs in the end. Of COURSE the military’s hubris brings them low. Of COURSE the avuncular President gives a stern lecture to the press about the sanctity of constitution and the press stands up and applauds.

Here in 2006, when the military takeover of the government has been accomplished so completely that we’ve almost forgotten it was ever any other way, the movie doesn’t seem scary at all; on the contrary, it seems now like Mr. Smith Goes to Washington must have seemed in 1964.

Absolutely ridiculous. John Wayne is tough as nails, which seems to have ruined his marriage, but then why does he win his ex-wife back by being . . . tough as nails? And the story’s far too tidy — what are the chances that the two rivals for the girl would meet up by chance in the middle of the Pacific Ocean — and the good guys win too often. Still, a decent submarine picture with a half-decent love story between John Wayne and Patricia Neal for good measure. Though I’ve long had a thing for submarine pictures; I think this is the first one I’ve seen where the crew watches a submarine movie, namely Destination Tokyo with Cary Grant. They mock it for being unrealistic — pretty funny, considering.

John Wayne’s an anti-Nazi captain of a German tramp steamer stuck in Sydney harbor at the declaration of war. Though no Nazi, Wayne decides he’s no traitor, either, and so’s determined to get back to the fatherland. What ensues is a weird hodgepodge of naval adventure, glamour shots of the conveniently stranded German spy Lana Turner (for whose affections Wayne must battle his wicked weasel of a second in command), and a war for public opinion after Wayne becomes, to his own chagrin, a cause celebre for his cunning in outwitting the Brits. Finally not really satifying as a war picture, a love story, or a commentary on the fourth estate, though there are reasonable efforts in each of these directions.

Foursquare WWII picture about the advent of the PT boat in the days after Pearl Harbor. Ford can do this sort of thing in his sleep and still do it beautifully by this point. Perfect chiaroscuro lighting and moments of utter horrible authority. A wounded soldier with his eyes bandaged over smoking a cigarette. A young sailor at a bar just after the news about Pearl comes through, finishing off his glass of milk and wiping his mouth on his sleeve. Most impressive of all, though, is the way the movie uses silence. It’s a war picture, and the sense of threat is present in nearly every moment, but there’s almost no shoot-em-up sequences. The most quintessential war movie scenes, in fact, are the ones in which nothing remotely warlike occurs, such as the earnest attempt at a dinner party at a forward base, which can’t help but remind me of the dance scene at the end of My Darling Clementine: ordinary people longing to live in ordinary times.

I used to loathe John Ford, but he’s growing on me in my old age. Next thing you know I’ll be saying that Abbey Road is better than Exile on Main Street.

And a bunch of other things, but these are the ones I’ve remembered not to forget.

Utterly contemporary account of the double-bind of illegal Mexican immigrants, encouraged to come north by labor-hungry farmers, exploited and discriminated against once they arrive. The only thing that seems different from today’s headlines is the film’s deep sympathy for the workers, and the extraordinary cooperation between the Mexican and American authorities it depicts. If only.